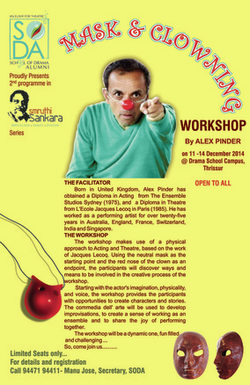 In teaching  I work with the definition of acting as “reacting to imaginary stimuli.”   I see my role as an Acting Teacher is to identify and nurture talent in students who have ambitions to work in the performing arts.   My approach is to encourage actors to be the creators of their own performances as well as being the interpreter of texts.

I teach techniques, that come from a foundation in rigorous training, followed by over thirty years work as an actor and director in theatre, film and television.

I teach stagecraft, interpreting text, and rehearsal techniques. I teach a number of forms and styles of theatre including clowning, commedia dell'arte, chorus work, Greek Tragedy, and Shakespeare.


Experience as a Teaching Artist in schools and communities
“A teaching artist is a practicing professional artist with the complementary skills, curiosities and sensibilities of an educator, who can effectively engage a wide range of people in learning experiences in, through, and about the arts.” Eric Booth

I work with the philosophy that everybody can be creative, and that   they have a right to express their creativity.   I like to offer that opportunity to be creative to people of all ages, abilities, and cultures, and especially to those who feel marginalised. This is has been a long-standing commitment and is the foundation upon which I co-founded Artists in Community International.


I share my knowledge and skills in the performing arts with individuals and communities. I do this through playful, as well as stimulating, workshops. I pass on and nurture the skills for participants to create their own performances, tell their own stories, and strengthen their communities.

The performing arts, when taught with care, develop self confidence and self-awareness, as well as enables people to engage in a creative experience with others.   It is a collaborative process which enabling participants to learn and empathise more with their community.

2018 Artists In Community International and  The Nepal School of  Phycology
Drama, Role-Play,Clowning  and Art in Community Care for councillors and community care workers

2014 to 2018 Artists in Community International and The Nepal School of Social Work.
Drama, role play. Clowning and Art for social work students and teachers

2013 to 2014 Fairfax Festival Swan Hill.
Creating a festival with school groups from remote and isolated areas of Victoria.

​2008        The Song Room Touring the Barkley region of The Northern Territory.
Running a Drama program with remote indigenous schools